This week we have a review of the short story collection None of This Is Real by Miranda Mellis (Sidebrow, 2012). It comes to us, interestingly, from Catherine Gammon, whose novel Sorrow was reviewed by Geri Lipschultz here on this blog last month. (This is just one instance of an author whose work was featured in the Women Writers Wednesday series being inspired to participate in the series herself. I love it when that happens!)

“Truly, a person may become an abyss: I felt it happening to me…” says the narrator of “Face,” the opening story in Miranda Mellis’s None of This is Real, a collection that like the line itself invites the reader to enter identity as shape shifter and narrative as potentially infinite transformation—to fall into the groundlessness of the world. 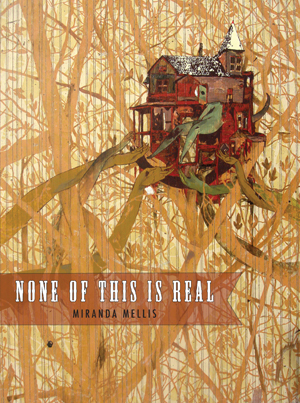 In “Face,” the narrating “I” that is a voice, potentially a character, disappears into its (her?) own face, in what it (she?) calls an illness, triggered by occasions of intimacy—the face taking over, “twitching, leering, telling a story over which I had no control.”

“Normal” intimacies for this narrator—“taking walks with friends, eating chocolates, giving advice”—are gone, the face falling into its “antic, sneering rebellions” whenever “deeper acquaintance, some superstructure of expectation to companionship, a closeness or depth of feeling or sincerity [was] required.”

More than just a first story, the shortest of the five that make up the collection, “Face” can be read as a preface to the whole, a preface in which the now non-speaker’s face becomes “a kaleidoscopic mask; people weren’t sure who they were looking at,” while the story, the voice of the story, the narrator who will not be a character, who feels “nonexistence encroaching” while the “body was rejecting meaning”—this voice of the story offers, “If I had ever been in a scene (and I had), those days were gone,” and finally asks of its future, “for what do I prepare?”

With these words, the tiny drama of the face becomes a manifesto of refusal, an opposition to the claims of so-called realism to command the rules of narrative—at the very least, for the duration of this collection, in which the five stories, by the very nature of their intentions and strategies, are entirely compelling in their narrative momentum. Their crystalline language, their manifestations and materializations of thought, their witty transformations of the so-called real­ world (all the more recognizable in Mellis’s playful distortions of it) invite and thoroughly satisfy. But as Mellis’s characters struggle with their mothers, with work, with ambition and failure, with love and loss and worlds collapsing, it may be the deployment of these gifts in the drive of storytelling itself, in the movement forward with a character or characters, a situation or situations, that as thoroughly captivates a reader’s curiosity and concern.

Each in its way, these are mental stories, each its own mind, its own world, as mind and world interact their way to revelation. These are stories of metamorphosis, not so much psychological as ontological, or simply linguistic, transformations—etymological, even metonymical, stories of the word. A man becomes a shark. A stalled line at a coffeehouse extends endlessly, until it permanently encompasses all the world. A child lives in her life as at a movie, believing she can turn away from what she does not want to see, attempting to bargain reality magically into being as she wants it—by not looking, hoping to keep visibility and violence at bay. A daughter, not precisely human, in an “old world” of fairy-tale magic, almost once upon a time (“hoping to please, as all young do”), migrates into a present reality that reveals itself as only slightly closer to dystopic than our own, ultimately arriving (via a science fictionally distant future) at the end of surveillance and simulation, all the world dissolving, collapsing beneath and behind her, to bring the collection to its close.

“None of This is Real,” the second story in the collection, centers on O, a character undergoing a transformation from within, the body in rebellion against its limitations as human. The story proceeds as if in a realist vein, only slowly revealing its fabulist premise; at the same time the elements of O’s transformation are embedded in the language throughout.

O visits his mother; they talk at cross purposes, O raising concerns about environmental degradation and surveillance, his mother acquiescing to social reality as it is and offering her troubled son platitudes that can’t meet his confusions. A would-be writer of “an unprecedented, encyclopedic, world-historical novel,” O works as a page in a library three states away, where he collects devastating data on the condition of the world:

He is troubled most of all by climate change:

The only answer he could think of was to re-evolve, or devolve, archaic equipment to tolerate heat and breathe underwater. Thick skins, gills, and fins. Animal adaptation seemed more promising than human politics anyway…. When he later learned that mass extinctions from the greenhouse effect would not include his species, which had brought it about, he was even more horrified by the injustice of cause and effect.

Suffering from mysterious headaches, O embarks on a journey through various forms of alternative and mystic healings, in search of connection, if not cure. The headaches are part of his body’s transformation, and this transformation continues throughout, in words and images that precede its recognition and might be understood themselves, like the words and rituals of magic, to bring the transformation into being. O, after all, is a page and his name an empty mark, his story not real, and his world is made, inescapably, of words, in play and magic both.

Various as the remaining stories are, this consciousness of their existing in and arising out of their language, rather than being represented by it, haunts them all.

If “None of This is Real” is the story of a mark and a page, “The Coffee Jockey” is the story of a line. It reveals its fundamental surreal move from the beginning, when a coffeehouse barista’s back goes out, halting the forward movement of the line of customers waiting, a line that inevitably grows, and grows without stopping. Everything follows from this, as with narrative freedom we travel out along the ever expanding line to encounter the people living their lives in waiting and follow the incidents the line is creating, until the waiting is an endless, permanent condition and the line itself is the entire world, both within the fiction and beyond it.

From loss of speech, to page and mark, to line, the collection turns next to figure, image, metonym. Rendered in the point of view of a young teenager, “Triple Feature” is a story without fabulist premises or fairy tale logic. It builds suspense out of the interplay between the girl’s acts of magical thinking and a technique of filmic terror—the suppressed knowledge of violence, its off-screen presence evoked by its absence and simultaneously made visible in voices overheard, an empty bedroom, a missing mother, the glimpse of a lone blue shoe, the hem of a robe caught in a closet door that will not open.

“Transformer,” the last story in the collection, begins as fairy tale and ends in science fiction, two liberating outliers of the imaginary, to complete the collection with a play on genre.

Although the title of this collection and the devices of the stories themselves constantly remind us that we are inhabiting fictional realities, the stories in None of This is Real demonstrate (as the most compelling “experimental” writing always seems to do) that in its freedoms of language and form, its radical inventions, the so-called experimental is capable of more richly and more accurately evoking and illuminating the dangers and complexities, the mysteries, of the so-called real than that so-called realism which plays strictly by what it imagines to be fiction’s rules.

As I write this, a video circulating on Facebook is demonstrating that with the mind we can see a subway train as going in either possible direction—the mind works the illusion, drives the perception. But Facebook observers are quick to comment that if you put your body on the train, the train will go in only one direction, no matter what game you play with your mind.

So are these stories like those mind games, clever illusions without consequence once we put ourselves on the train? At the end of “Transformers,” the world vanishes behind the magical daughter, Lutz Junior. But as it vanishes, without sight or sound or feeling, Lutz Junior knows she lands. Which is to say, the answer to the question is to read the stories, to play the game.

Catherine Gammon is a fiction writer and Soto Zen priest. Her novel Sorrow (Braddock Avenue Books, 2013) was a finalist for the Northern California Book Award. Her novel Isabel Out of the Rain was published in 1991 by Mercury House, and her shorter fiction has appeared in many literary journals, Ploughshares, The Kenyon Review, The New England Review, Third Coast, and Other Voices among them. Before beginning residential Zen training at San Francisco Zen Center’s Green Gulch Farm, Catherine served on the faculty of the MFA program of the University of Pittsburgh. More information is available at catherinegammon.com and writingasawisdomproject.wordpress.com.