First, let me apologize for not posting a Poem-A-Day yesterday or last night. I fully intended to, but we had a birthday party for our aforementioned newly minted teenager last night, and it ran a bit longer than expected, and I was already wrecked from this week at work, so I just sort of forgot and went to bed before I could post. Oops.

So today, I will post TWO Poems-A-Day! Yes, you read that correctly —  a bonus poem is your reward for suffering through my error. I’ll post one this morning and another one later today so they don’t crowd up on each other.

If you have followed my blog for any length of time — or if you just follow along every April — you know that I’m a big fan of the poetry of John Donne. He writes about love in an extremely frank way: not with the formality one might expect of the Seventeenth Century, nor with the reservedness one might expect of someone who later became a priest. His thoughts on the matter are raw and passionate and earnest and — occasionally — mischievous. I also like that Donne’s language requires the reader to wrestle with it just a bit. It’s not like Gerard Manly Hopkins or anything, but you do have to be thinking while you read Donne’s work if you want to get anything out of it.

His love poetry is not the only work of his I like, of course; “Holy Sonnet X” is maybe one of my favorite poems in the entire historical pageant of literature. Today I’m sharing with you one of his love poems, though. It’s a poem that embraces the ferocity of desire within the limits of propriety. If you’d like to read an incisive critical analysis of it, click here.

Where, like a pillow on a bed
A pregnant bank swell’d up to rest
The violet’s reclining head,
Sat we two, one another’s best;

Our hands were firmly cemented
With a fast balm, which thence did spring;
Our eye-beams twisted, and did thread
Our eyes upon one double string;

So to’ intergraft our hands, as yet
Was all the means to make us one,
And pictures in our eyes to get
Was all our propagation.

As ’twixt two equal armies fate
Suspends uncertain victory,
Our souls (which to advance their state
Were gone out) hung ’twixt her and me.

And whilst our souls negotiate there,
We like sepulchral statues lay;
All day, the same our postures were,
And we said nothing, all the day.

If any, so by love refin’d
That he soul’s language understood,
And by good love were grown all mind,
Within convenient distance stood,

He (though he knew not which soul spake,
Because both meant, both spake the same)
Might thence a new concoction take
And part far purer than he came.

This ecstasy doth unperplex,
We said, and tell us what we love;
We see by this it was not sex,
We see we saw not what did move;

But as all several souls contain
Mixture of things, they know not what,
Love these mix’d souls doth mix again
And makes both one, each this and that.

A single violet transplant,
The strength, the colour, and the size,
(All which before was poor and scant)
Redoubles still, and multiplies.

When love with one another so
Interinanimates two souls,
That abler soul, which thence doth flow,
Defects of loneliness controls.

We then, who are this new soul, know
Of what we are compos’d and made,
For th’ atomies of which we grow
Are souls, whom no change can invade.

But O alas, so long, so far,
Our bodies why do we forbear?
They are ours, though they are not we; we are
The intelligences, they the spheres.

We owe them thanks, because they thus
Did us, to us, at first convey,
Yielded their senses’ force to us,
Nor are dross to us, but allay.

On man heaven’s influence works not so,
But that it first imprints the air;
So soul into the soul may flow,
Though it to body first repair.

As our blood labours to beget
Spirits, as like souls as it can,
Because such fingers need to knit
That subtle knot which makes us man,

So must pure lovers’ souls descend
T’ affections, and to faculties,
Which sense may reach and apprehend,
Else a great prince in prison lies.

To our bodies turn we then, that so
Weak men on love reveal’d may look;
Love’s mysteries in souls do grow,
But yet the body is his book.

And if some lover, such as we,
Have heard this dialogue of one,
Let him still mark us, he shall see
Small change, when we’are to bodies gone.

Since Donne couldn’t provide me with an author bio himself, I snagged this from 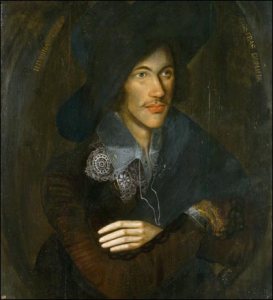 John Donne (22 January 1572 – 31 March 1631) was an English poet and cleric in the Church of England. He is considered the pre-eminent representative of the metaphysical poets. His works are noted for their strong, sensual style and include sonnets, love poems, religious poems, Latin translations, epigrams, elegies, songs, satires and sermons. His poetry is noted for its vibrancy of language and inventiveness of metaphor, especially compared to that of his contemporaries.