Rather than give you my list of recommended reads all at once this summer, I’ve asked some other authors and readers to share their recommendations with you. They won’t all be this summer, either, because it’s good to read all year.

Our first book response is of George Orwell’s 1984 by the poet Marie Marshall. Check out her blog here to get near-daily doses of her absolute magic with language.

I have selected for your summer reading what must seem like a bleak, joyless, and pessimistic read. Moreover, it is the only work by a male writer from my shortlist, which included Harper Lee, Marilyn French, and Isabel Allende. However, if you have never read Nineteen Eighty-Four, you have missed the greatest political satire of the twentieth century. I’m using the term broadly but properly – satire is not necessarily supposed to make one laugh, and this book certainly won’t. Orwell once said that ‘The four great motives for writing prose are sheer egoism, esthetic enthusiasm, historical impulse, and political purpose’ and that ‘all art is propaganda’. In a novel which, superficially, is futuristic in the time when it was written, Orwell imagines a world where every political reality he witnessed in his life is taken to an awful, logical extreme. With the exception of a few items of technology, included in the story to reinforce its futuristic mis-en-scène, every aspect of politics and sociology in ‘Oceania’ and ‘Airstrip One’ in particular is based closely on something he has seen first-hand in wartime Britain or in revolutionary Barcelona after the Stalinist takeover, or by arms-length observation of the Soviet Union, the Third Reich, and changing attitudes to them in ‘the West’.

The protagonist, Winston Smith, is a minor functionary within the ‘Ingsoc’ Party machine. He is not a mindless devotee of the Party, however, as there is a nagging doubt in the back of his mind that he can’t find the right words or mind-pictures to express. This state of mind is a dangerous one, as it represents ‘thought crime’ – treason without utterance or action but merely by concept, the ultimate political crime. The focalized narrative traces his covert attempts to find out what life was like before the revolution that changed Britain forever, and to find some way of articulating his opposition, even in an ineffectual way such as cursing ‘Big Brother’, the Party figurehead, by writing ‘Down with Big Brother’ over and over again in a notebook, like a naughty schoolboy writing lines. Winston is diverted by Julia, a young woman who, although superficially an enthusiastic Party member, secretly subverts the system with her predatory sexuality. They become lovers and enjoy some respite from the tedium and deprivation of everyday life, until their eventual, inevitable capture and torture by the ‘Thought Police’. Winston’s interrogation is harrowing, and his eventual epiphany tragic.

On its publication, Nineteen Eighty-Four was seized on by the right as a condemnation of communism. Never has a point been so surely missed! Yes the term ‘Ingsoc’ is a contraction of ‘English Socialism’, and yes the Party represents itself as ‘socialist’, but against their own rhetoric the Party ‘rejects and vilifies every principle for which the Socialist movement originally stood, and it does so in the name of Socialism’ (my emphasis). Orwell never repudiated his own socialism, having fought in a socialist militia during the Spanish Civil War. His true target in the novel is the betrayal of those principles for which he fought. Winston Smith’s interrogator puts it succinctly and cogently:

The German Nazis and the Russian Communists came very close to us in their methods, but they never had the courage to recognize their own motives. They pretended, perhaps they even believed, that they had seized power unwillingly and for a limited time, and that just round the corner there lay a paradise where human beings would be free and equal. We are not like that. We know that no one ever seizes power with the intention of relinquishing it. Power is not a means, it is an end. One does not establish a dictatorship in order to safeguard a revolution; one makes the revolution in order to establish the dictatorship. The object of persecution is persecution. The object of torture is torture. The object of power is power.

Those last three words – didn’t I hear Cersei Lannister quote them in Game of Thrones? Now that is what I call a legacy! With the collapse of the Soviet Union and the Warsaw Pact, and the rehabilitation of the People’s Republic of China to state-sponsored capitalism, the twenty-first century world is very different from Orwell’s perceived three power-blocs. However, drill down into the principles of wielding power in neo-liberal capitalism, and in the politics, propagandizing, and ultra-patriotism of the more powerful nation-states today, and you will see that the object of power is still power. And in that fact lies the persuasiveness and continuing relevance of this novel. 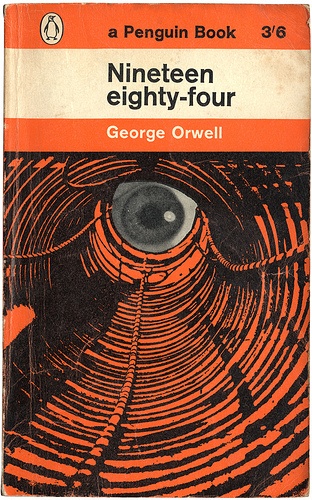 There are long passages of Nineteen Eighty-Four that take the reader out of the narrative. Mainly they are supposed sections of an anti-Party book written by the Trotsky-like Emmanuel Goldstein. In these passages reside Orwell’s most direct instrumentalism, his analysis of power; in the narrative the effect of power is shown, in the Goldstein passages the realities of power are explained. Don’t skip them.

One of the most interesting inventions of the novel is ‘Newspeak’, the simplified English with which the Party hopes to obliterate the basis of dissenting thought. Ironically it is based on Orwell’s own ideas for clarifying English usage, but in creating Newspeak he took away his own safeguards. As an invented lexicon it has probably never been bettered in fiction. Only Anthony Burgess’s ‘nadsat’ slang in A Clockwork Orange (1962) is at all comparable. Before Orwell, only a handful of academics dealing with what is now called ‘semiotics’ or ‘semiology’ appreciated the power of words to shape thought. Other incidental ‘inventions’ include the helicopter gunship and, most importantly, the culture of surveillance. If Orwell could see how tamely we have accepted ubiquitous cameras, the collection of data from every click of the TV remote and keystroke of the computer, satellites and spy-drones, the voluntary electronic-tagging in the GPS chips of our phones and tablets, he would be aghast and wonder why we had not taken his warning to heart. In our case it’s not that we can’t turn off the surveillance that is closest to us, it’s that we have been persuaded to volunteer not to.

Every day we are told what to think and how to think it. In that respect Orwell’s vision is relevant today. Please read this book, I can’t recommend it too highly. If you can’t bear the idea of its obvious didacticism, then read it as the personal tragedy of Winston Smith. It does have qualities that draw a reader into its narrative, and it has one of the most famous opening sentences in fiction.

Alternative choice: If you like good, modern detective fiction, and in particular Scandinavian ‘noir’, start reading the Harry Hole series by Jo Nesbo. Start with The Bat (1997), which is actually set in Australia, and work your way on from there – you’ll find it compulsive reading.

You can read my review of Marie Marshall’s collection of poetry Naked in the Sea by clicking here.

Hey there, all.  Sorry for the little hiatus. It seems like this summer so far has consisted mainly of driving my kids to their camps. Getting quality writing time in has been a challenge. But progress is being made, and I wanted to give you a heads-up as to what you can look forward to (not necessarily in this order) over the next few weeks!

*  a book review from Marie Marshall

*  an interview with Russ Linton, author of the just-released Crimson Son

When I was in high school, one of my classmates and I found ourselves mildly obsessed with the poetry of Sara Teasdale. We found a copy of her collected works in the school library and took turns checking it out, over and over again, until it never spent any time in the stacks anymore. We loved that book.

Even if I wouldn’t necessarily gravitate toward her verse now, Teasdale sparked something important in me: she helped me get past my hatred of poetry.

In my high school English classes, we mostly read poems from that no-woman’s-time between Emily END_OF_DOCUMENT_TOKEN_TO_BE_REPLACED

This week we have a grand guest post from fellow blogger and author Marie Marshall.  (Visit her excellent site here.)  Enjoy!

I remember the first time I made the conscious choice to wear a boy’s garment. Strangely, it was during what must have been my most ‘femme’ fashion stage. I was thirteen, and along with my best friend I was hooked on the urban fashion of END_OF_DOCUMENT_TOKEN_TO_BE_REPLACED

Happy Hallowe’en!  Since I’m not actually capable of taking a decent picture of anything — not even an inanimate and stationery object in medium natural light, much less actual living people — I have to wait on friends and family members to send me their photos before I can share them.

In the meantime, here is something delightful for you to enjoy:

And please also take a look at Scotland-based author Marie Marshall’s blog, where she has graciously reviewed my website and some of my poetry.  One of my poems is also included in the review, so, you know, bonus.  Thank you, Marie.  🙂