Is there a more iconic 90s-era one-hit wonder than “Flagpole Sitta” by Harvey Danger? It’s possible there is, but it’s not coming to mind at the moment. And the reason why? Because this song has been stuck in my head for a while now.

Recently I teased a note on here that I was working on a new project but couldn’t say anything about it yet. Well, that project has come to fruition in the last few days. 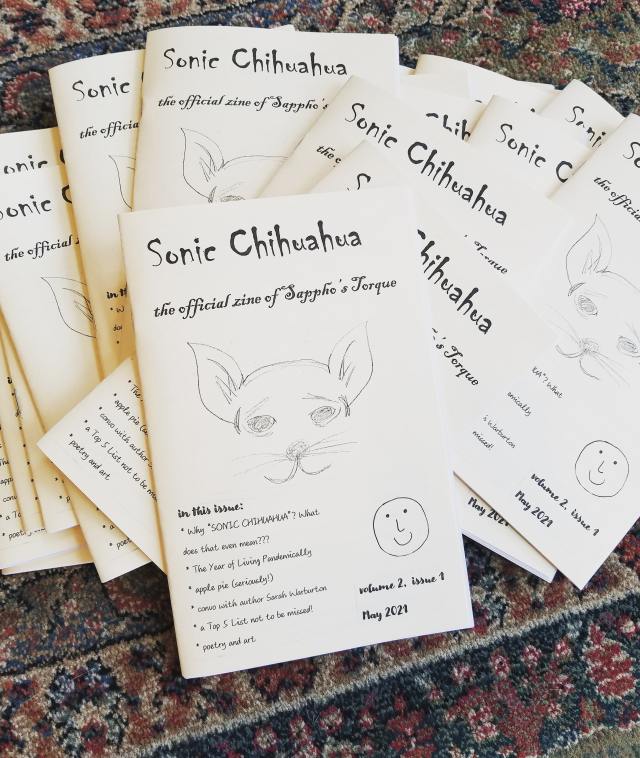 Back in the early 90s, I and a couple of my friends from high school, named Alli and Lauren, made a zine called The Sonic Chihuahua. We published it for one summer, three issues. I wish I still had them. I wrote articles and printed them out on my mom’s dot-matrix printer and then taped them onto plain paper and Xeroxed the zine on the copy machine at my family’s grocery store. I don’t remember a whole lot about the content of each issue, but I do recall that in our first or second one I wrote a review of Nirvana’s first album — not Nevermind, which was pretty hot at the time, but Bleach, which might have been a demo. I’d gotten a bootleg cassette of it and went to town with my hot take. We also had a regular column called “EAT THIS” that featured recipes. I remember Alli and Lauren made some great doodle illustrations for the margins.

But come August, I was going off to college and my friends were going back to high school, and I was getting antsy that they might get in trouble at school for doing something so edgy and underground. (That was the kind of school we went to back then.) So I wanted to stop the project because I was worried about them. They were not worried at all and didn’t want it to end, but I pulled out of the project, and it died.

I have always regretted that: my anxiety for them and my unwillingness to risk.

Well, for the last couple-few years I’ve been thinking about The Sonic Chihuahua and wishing I’d kept up with it and wondering whether I should revive it. And to make a long story short, several things have happened in this last month that, frankly, have assembled themselves into a giant Magic-8 Ball telling me, “All signs point to Yes.”

So. Twenty-nine or so years later, Sonic Chihuahua is back, better than ever. My Friday-night decompression the last few weeks has been putting this zine together. I’m going to try and do an issue each month. It fills a creative need I have and has also catapulted me out of a..let’s call it a malaise. Maybe at some point the new Sonic Chihuahua will find its way to Alli and Lauren and I’ll be back in touch with them. That would be serendipitous, I think.

Anyway, time for this week’s earworm — which is late because today was the last day of classes and I’m preparing for final exams (and because yesterday I spent some time on zine distribution). The lyric “I wanna publish zines and rage against machines” has been stuck in my head since I first decided the zine was going to come back. And I went back and looked up the lyric and found the title and band name (which had been lost to my memory). And I really paid attention to the song this time and realized that the lyrics are actually pretty funny, mildly clever, and a refreshing change from the lowest common denominator of pop music we sometimes get with two and a half verses of mostly repetitive and mostly uninspired words.

Anyway. Enjoy this bit of nostalgia. (And if you want a copy of the zine, send me an email to SonicChihuahuaZine@gmail.com. I’ll mail you one.)