When I curate the Poem-A-Day series, most of the time I schedule the poems into a calendar for April ahead of time. To some extent, the ordering is random; it often is a result of when the poets send their work to me. I try to sprinkle in the ancient or otherwise historical poets in at scattered intervals, and then there are some things I’m very intentional about: Shakespeare’s birthday, my kid’s birthday, my friend Christa’s birthday when she’s one of the featured poets in a given year. But much of it is a matter of chance.

Now and then I match a poem with something going on in the zeitgeist. And sometimes that synchronicity is just serendipitous — as in the case of tonight’s poem, which was scheduled for this date weeks ago.

My friends, one act of justice does not equal widespread justice. But it is a good first step toward accountability.

I offer you “Five Hundred And Twenty-Six Seconds” by E. R. Sanchez.

Black lives matter because you can drive, Kenosha to Antioch,
enter Culver’s, order your ButterBurger Value Basket and a Concrete
Mixer with Ooey Gooey, Nuts, and Candy, kick back after
just enough Wisconsin Cheddar Cheese Sauce on your Crinkle Cut
Fries, pass out, then wake up to a knock at
the door; cops smile. “Can we ask you some questions?” (1)

Black lives matter because he can’t walk and hold his
eldest son’s birthday cake, play catch with his second boy.
A father will never kneel to help his youngest tie
his shoes for the first time, stand and stretch after
getting up from bed, or be judged as guiltless until
proven otherwise; treating humans justly is reserved for the privileged. (2)

Black lives matter because you can defy rules, expect no
one to enforce them while you Google bird types, so
you can tweet images, impressing followers with your love of
birdwatching; after seeing likes, you ponder, why did the birds
leave so soon? Next, you leash your dog, the one
that barked, making birds scatter; their instinct for surviving predators. (3)

Black lives matter because she can’t wake up tomorrow, can’t
clock in at the University of Louisville Health, can’t call
out for a family emergency. She’s still trying to solve
who is breaking down her front door, still yelling in
the hallway waiting for her answer, still lying alone behind
barricade tape, eternally wishing for an EMT to help her. (4)

Black lives matter because you can claim self-defense, privileged to
expect justice; jury agrees you stood your ground and deserve
acquittal because you couldn’t take losing a street fight, or
follow dispatcher’s directions to leave him alone. Now, you’re autographing
Skittles and Arizona Iced Teas for fawning fans wearing Confederate
flags, glorifying your hatred as if your actions were noble. (5)

Black lives matter because he can’t celebrate his eighteenth birthday,
see where his goals can take him, give his dad
a bear hug, send a Happy Mother’s Day card. He’s
still coming home—Skittles always on the ground. Arizona Iced
Tea never stops warming up—forever gasping, murdered for winning
a street fight. He will never sign his name again. (6)

Black lives matter because you can go to a construction
site, get a drink of water without being lynched by
vigilantes; retired cop, son, friend, watch their film, high five
each other, cheer for the gunshot as the human drops.
Police declare they’re innocent. When they experience the video going
viral, friend’s guilt becomes revealed truth, but remorse cannot revive. (7)

Black lives matter because they can’t exercise outdoors without worrying
if the next car, truck, van, cruiser, is filled with
thugs looking for an easy target. They can’t see their
son drink a protein shake after an exhausting run because
he’s still trying to avoid you, your threat, the gunshot.
His eyes see you smiling, endlessly living his twenty-fifth year. (8) 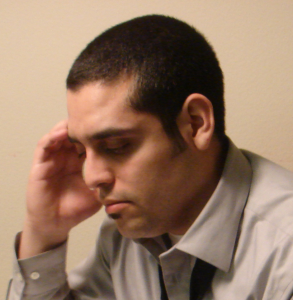 E. R. Sanchez earned a bachelor of arts in English and a minor in creative writing from San José State University. While attending SJSU, he was a 3-time National Poetry Slam semi-finalist before retiring from competition to focus on his senior year. Sanchez’s poetry and short stories have appeared in publications such as Poetry Super Highway, Writing Raw, Red Fez, Ray’s Road Review, Zouch, Zombie Logic Review, and Single Mother Magazine. Fried Potato Press is set to release his novel Petaco Dreams by the summer of 2021.