Last year I was one of the judges for the Poetry Super Highway Annual Poetry Contest, and this was one of the poems that the judges all deemed excellent. (It won 3rd place from among nearly a thousand poems.) After the contest was over, I asked Rick Lupert, who runs PSH, if I could learn the names of the poets who’d written a handful of the poems I read while judging. He obliged, and I contacted them, and some have agreed to let me post their work on my blog this year. Angele Ellis is one of those gracious and talented poets. She is also, like me, of Lebanese descent, and has written about her roots. I highly recommend this wonderful poem of hers.

Today’s offering, “Scenes from Frozen River,” speaks to me for several reasons, even beyond the vivid imagery and poignant depth of feeling. I love the consistency of the form, the evenness on the page despite the emotional maelstrom of the content. I love that the speaker seems to have a multi-ethnic ancestry: I myself am both Arab and Native American (each from a different parent) and don’t often encounter anything that or any person who embodies or acknowledges both.

There’s not much else I can say about this poem that it can’t do on its own, and far better than I, so I’ll just leave it here for you to enjoy.

(1) Often Rebuked, Yet Always Back Returning

to this burdened snowscape, this land pressed
flat by a lake effect sky. The deep blue bays
of Ontario ripple and swell, an ocean
drawing in. Tides, shrieking gulls, shells.

Twenty years ago, pulling up to a cousin’s
winterized cottage in Chaumont—Shah-moan,
for the French nobleman who claimed it—
her mother warned: Don’t be shocked if she’s strange.

O God of our childhood. She was bloated and strung out
on pain pills—shaking and keening over her best friend,
killed in that so-called one-car accident two years before.
Broken—broken through a frosted wall of glass

the fabled good looks of Yasmina,
my father’s far relation. On that other side—
unknown beauty whose tear-stained mouth embraced
her steering wheel at the terminus of white tracks.

My aunt: She wouldn’t have wanted to live after that.

(2) Often Rebuked, Yet Always Back Returning

to this burdened snowscape, this land where
a hard-bitten movie heroine craves a doublewide,
bad enough to smuggle illegals on thin ice
over the invisible border slicing the Mohawk rez.

I know her plowed-field misery. And the other,
her accomplice: black hair and pillowed cheeks.
The young face of my Mohawk cousins, before
we started gambling, every goddamn day.

I know that plywood shelf crowned with Regal,
these dead drifts deeper than crevasses,
those thrift stores stalked by marked-down bosses.
This land slapped flat by a husband’s hand.

On film, beached hope is salvaged. The ravaged
woman goes to jail. Her Mohawk friend tends
their children in the showroom trailer, gleaming
whale tamed by its female Jonah. Swallowed

whole into darkness, I no longer care how it ends.

3) Often Rebuked, Yet Always Back Returning

to this burdened snowscape, this land, in a van
far removed from the rattling paneled station wagons
of our pasts. Upholstered plush muffles gossip
as we glide, cresting the scenic route. There’s

no place like home! cries a cousin, half-amazed.
We finger landmarks from her tinted windows.
Almost a pleasure trip, this funeral: what’s left
to the middle-aged. Another death, yet we go on

like the Donner Party, sucking marrow from dry bones.
Does it matter who remains among the living?
This land pressed flat in our broken View-Master.
Bovine doublewides grazing the old farms. Lusting

for nothing, we laugh to break the stitches in our sides. 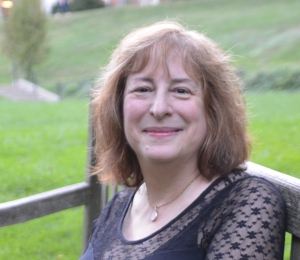 Angele Ellis’s haiku appeared on a theater marquee after winning Pittsburgh’s Filmmakers’ G-20 Haiku Contest. Her poetry, fiction, essays, and reviews have been published in seventy journals and seventeen anthologies. She is author of Arab on Radar (Six Gallery), whose poems about her family heritage and political activism won a fellowship from the Pennsylvania Council on the Arts, Spared (A Main Street Rag Editor’s Choice Chapbook), and Under the Kaufmann’s Clock (Six Gallery), a fiction/poetry hybrid inspired by her adopted city of Pittsburgh, with photographs by Rebecca Clever. For more information on Angele and her work, click here.