Today on the blog is a poem from Adam Holt, my friend and colleague. He gave me this poem along with his own commentary, so I’ll just let that speak for itself.

A note from the author: I wanted to submit something with a bit more depth to Angélique’s blog series, but this is the freshest thing I’ve written. It’s a tribute to the poet Gary Soto, who wrote Neighborhood Odes. I read it with my students this year while we could all still sit together in a classroom. They even acted out some of the poems, memorably. At any rate, with the pandemic on, I’ve found solace from all the graphs, charts, and press conferences in the down-to-earth magic of the ukulele, in the three-note perfection of Tom Petty’s “Free Fallin’.” I hope you will, too.

Down-to-Earth Angel Music:
An Ode to My Ukulele

It’s a little brother of an instrument:
the pint size sibling of the guitar.
It’s not always in tune
but it’s easy to tune.
No matter where I put my fingers
I hear angels sing —

Not big fancy angels
in bleached white robes,
but down to earth angels
sprawled on the couch
in their sweatpants singing,
“Hey, hallelujah, everybody!”

“Free Fallin’” only takes three fingers to play,
and I strum it for my mom
while she cooks jambalaya.
That’s how I pay for dinner
when I go to my parents’ house —
with down-to-earth angel music.
She likes music and I like to eat:
We both feel like we’re getting
a steal of a deal.

Now, whenever the sound resonates
through my apartment,
blessing me with thrumming strings of hope,
I think of my mom
and all the savor of the Gulf of Mexico
rising like prayers to Heaven from that pot
full of spice and oversized shrimp.

I smile and play my song,
even though the jambalaya is long gone.
I’m free, free fallin’,
no matter how many times
I hit the wrong note.
I’m free fallin’,
with my little brother of an instrument
fixing all the crooked notes
until my song of three chords sounds
not perfect
but
triune, Texan, together,
messy, masterful, and maybe a little
McConaughey:
alright, alright, alright. 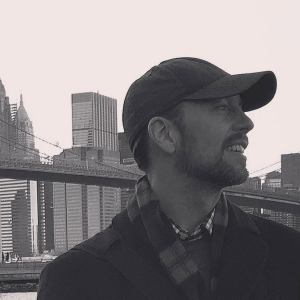 Adam Holt is a novelist, singer-songwriter, and poet. He was a featured poet for the Houston Public Library’s Public Poetry Series, and most recently his work was featured in the Color:Story2019 art exhibition. His band Lone Star Rambler released their album Stars and Wonder in 2017. The Tully Harper Series, his YA sci-fi series, is a near-future story meant to inspire young readers’ interest in human space exploration. He is as an instructor at Writespace and The Kinkaid School. He lives in Houston, Texas. For more information about his work, click on http://adamholtwrites.com.