My sophomores are doing the Dear Poet project this year; it’s the first time I’ve taught it, but I’ll be doing it for my foreseeable future teaching years, I think, because it has been wonderful. My students engage with a newish poem by one of the chancellors of the Academy of American Poets, and then write a letter in response to the poem, to the poet. Maybe one or two of them might even get a response from the poet. You never know.

One of the historical poets included as part of the warm-up activities is Galway Kinnell, for his poem “The Gray Heron.” I did not know that poem before this project, but now every time I read it or my students discuss it, I like the poem more and more. I just love the way the imagery carries the comparison of the lizard to stone almost all the way to the poem’s suddenly magic-realist ending.

It held its head still
while its body and green
legs wobbled in wide arcs
from side to side. When
it stalked out of sight,
I went after it, but all
I could find where I was
expecting to see the bird
was a three-foot-long lizard
in ill-fitting skin
and with linear mouth
expressive of the even temper
of the mineral kingdom.
It stopped and tilted its head,
which was much like
a fieldstone with an eye
in it, which was watching me
to see if I would go
or change into something else.

Galway Kinnell was born in Providence, Rhode Island, in 1927. He had an 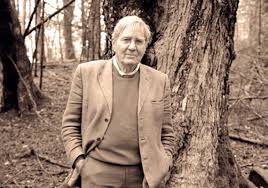 illustrious career which included military service, teaching, a seven-year stint as a chancellor for the Academy of American Poets, meaningful work in the Civil Rights Movement, and a list of publications as long as my arm. He died in 2014. You can learn more about him here.