I recently saw this poem and it just knocked me out. The author, A. E. Stallings, generously allowed me to share it with you here.

In an environment where some writers may feel a tension between wanting to give voice to a marginalized perspective and not having the right to assume that perspective, Stallings’ poem creates a space for empathy and understanding and compassion and guilt without being heavy-handed. On a more technical note, I’m impressed by the poet’s use of rhyme and meter to create the even but not even, symmetrical but somehow “listing,” feeling of riding waves on the ocean.

Below the poem, find the poet’s own commentary on it. This poem first appeared in Literary Matters, and it later appeared in Women’s Voices for Change along with Stallings’ commentary.

My love, I’m grateful tonight
Our listing bed isn’t a raft
Precariously adrift
As we dodge the coast-guard light,

And clasp hold of a girl and a boy.
I’m glad that we didn’t wake
Our kids in the thin hours, to take
Not a thing, not a favorite toy,

And we didn’t hand over our cash
To one of the smuggling rackets,
That we didn’t buy cheap lifejackets
No better than bright orange trash

And less buoyant. I’m glad that the dark
Above us, is not deeply twinned
Beneath us, and moiled with wind,
And we don’t scan the sky for a mark,

Any mark, that demarcates a shore
As the dinghy starts taking on water.
I’m glad that our six-year old daughter,
Who can’t swim, is a foot off the floor

In the bottom bunk, and our son
With his broken arm’s high and dry,
That the ceiling is not seeping sky,
With our journey but hardly begun.

Empathy isn’t generous,
It’s selfish. It’s not being nice
To say I would pay any price
Not to be those who’d die to be us.

“I am trying to remember exactly when I wrote this—it seems to have been published in September of 2015 but must have been written in the summer. My son did indeed have a broken arm, and my daughter was a six-year old who was fearless on the beach but with little in the way of swimming skills. The civil war in Syria was starting to become more visible in Athens—there had been a number of people, mainly families camped and protesting in the main square, Syntagma, until the police whisked them off one night. My husband is a journalist and had gone on Coast Guard patrols in the Eastern Aegean as these flimsy dinghies started coming in greater numbers. He had interviewed people who had been in the water for hours. (In one case, a woman had managed to save a baby, but not another child, who slipped her grasp.) That famous photo of the drowned toddler (Alan Kurdi) was shared widely in September of that year, but that was only one image, and this poem would have been written before that, I believe. Local news and social media sites often showed images of the drowned—kids my own kids’ ages, in similar clothes.

“By January of 2016, an average of ten people a day were drowning—again, often children, with one day seeing thirty-nine deaths. And of course not everyone was even found or declared missing. That was after this poem was written, but this sense that children were drowning in the same water we swam in haunted me all summer, the sense of the Aegean as dangerous and full of death as well as wine-dark or Santorini blue, and that the same element that caressed my children pulled others under. I had dreams about making that crossing. It was maybe that heightened sense of vigilance and danger you just have as a parent of young children, the way you can’t avoid reading terrible news stories about mishaps and accidents.

“But I did not want to write from the point of view of people undergoing this—that felt false to me; in a way I felt it was unimaginable and I wanted to keep that sense—and I wanted to engage with the very difficulty of writing about it. Empathy is derived from the Greek, of course, but it has almost the opposite meaning in Modern Greek to its English denotation—to feel in or towards someone and thus perhaps to feel against them. (The English word is itself a relatively recent coinage, with a pseudo-Greek lineage out of the German translation—before that, I suppose we had only “sympathy”—to feel or suffer “with” someone.) The poem was written relatively quickly, and I wanted to make sure in revision not to smooth the rough edges, the odd off-rhyme or rhythmic off-kilterness. I don’t normally end a poem so flatly, on such a bald statement, but I wanted that gambit here. And I wanted the poem to be published and distributed quickly—it spoke to the moment—which was why I was very glad it was taken by the (then-new) online magazine, Literary Matters.”

A. E. (Alicia) Stallings studied classics in Athens, Georgia, and has lived since 1999 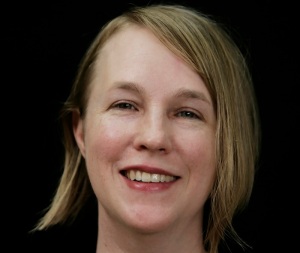 in Athens, Greece. She has published three books of poetry, Archaic Smile (University of Evansville 1999), winner of the Richard Wilbur Award, Hapax (TriQuarterly 2000), and Olives (TriQuarterly 2012), as wells as verse translations of Hesiod’s Works and Days (Penguin Classics 2018) and Lucretius’s The Nature of Things (Penguin Classics 2009). A new book of poetry, Like, is forthcoming from Farrar, Straus and Giroux Press in the fall. Stallings is the recipient of fellowships from the Guggenheim Foundation and the MacArthur Foundation, and is a teacher beloved of students all over the world. Visit her website and order her most recent book here.