I love social consciousness in poetry. Even better when satire is involved.

Remember back in December when seven important words were banned from appearing in CDC documents related to their budget? 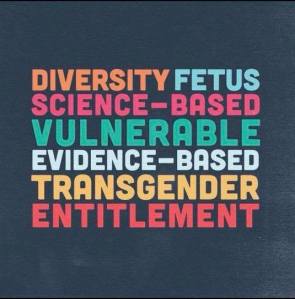 Talk about insidious and damaging and hateful. Of all the things the current administration has done which are repulsive, this floats near the top of the list. It doesn’t even really matter how the words were banned or for what purposes. Anyone paying attention and thinking with a critical/analytical mind knows what’s going on here, and it has a lot to do with “framing the debate” (also known as “spin” or “controlling perception” or “manipulating the listener”) and with chipping away at civil liberties and human rights.

In response, enter the poet Elizabeth Gross and the sestina form.

If you’re unfamiliar with the sestina, it’s an old French form which operates on the spiral rotation of six words to create a thirty-nine-line poem. They are marvelous and fun writing puzzles. See if you can identify the key words and the rotating form in this poem by Elizabeth Gross, which first appeared in the CDC Poetry Project, edited by Sarah Freligh and Amy Lemmon.

Hellooo, potential soul-mates! A little about me: ever since I was a fetus
I’ve felt most comfortable underwater—we all start out transgender
mer-folk after all, with gills and tails—suddenly vulnerable
to everyone and everything when we hit the air. Entitlement
begins here, begins early, with a slap. Yet, for some, an evidence-based
approach eventually reveals that others exist, and there is a diversity

of consciousness to color in the lines drawn by our diversity
of physical bodies. I start with my own example as a fetus
but really I’m looking for someone older, awake to the evidence-based
world around them—I mean, the end of the world. A woman, transgender
or non-binary individual because I can’t even with the entitlement
of straight cisgender men. How are they still talking? How invulnerable

to shame? Are they actually convinced that they’re the vulnerable
ones in this society? Digging in their heels so the new “diversity
hire” can’t put on the same bad suits? Whining entitlements
are un-American! Hate-watching RuPaul’s Drag race from a fetal
position, tweeting rage, kept up at night by fantasies of transgender
people using the same bathrooms as their wives. An evidence-based

analysis reveals zero threat to cis straight men, but evidence-based
studies do show our culture slowly changing as the vulnerable
claim more space, more time (shout out to you activist honeys!) Transgender
women of color are still targets of violence but we wear DIVERSITY
IS STRENGTH on tee shirts sometimes, right? Now it’s me in the fetal
position—the world is too much/not enough right now—aren’t we entitled

to feel a little bit okay sometimes? No? Not ever? Am I even entitled
to a we here, in this divided moment? I want an evidence-based
takedown of the language of authority. I want a language-less fetus
culturally speaking, a fresh start. Let’s pretend we’re all vulnerable
here (because we actually are) and also recognize a diversity
of strengths as strength, remake ourselves in the image of a new transgender

god. To recap: I want to find a girlfriend (broadly defined). Transgender
non-binary genderqueer femme tomboy yay! (I know, I know, my entitlement
is showing.) My references will attest to my loyalty and candor. I offer a
.      diversity
of first date suggestions, crowdsourced and vetted—truly an evidence-based
approach to dating. Let’s trade anxiety dreams without touching, get vulnerable
and cry for a while, on the floor, separately, with NPR on, in the fetal

position. Too much? I’ll call you fetus if you call me science. We’re all entitled
to evidence-based pet names that reflect our true diversity—
transgender, cisgender, anygender the heart can hold, make vulnerable again.

Elizabeth Gross is a poet/translator/teacher/karaoke enthusiast from New Orleans. 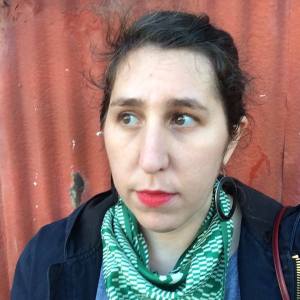 She completed her MFA in poetry at Hunter College of the City University of New York and still inhabits New York occasionally in her stress dreams. She co-translated and produced a new adaptation of Euripides’ Bakkhai at the Marigny Opera House in 2015. Her chapbook Dear Escape Artist, a collaboration with artist Sara White, came out from Antenna in 2016. More poems have recently appeared in Okey-Panky, TENDERLOIN, Fairy Tale Review, and Painted Bride Quarterly. You can find more about her and her work at grosselectricworks.com.