My children are eleven and about-to-be-thirteen. Sometimes I wonder whether I will ever stop worrying about them. I’m confident the answer is likely no.

Sometimes at school events, I test this. I’ve been teaching at this school for eighteen years. They’ve been attending this school since they were four. They treat the campus — which, after all, is a comparatively safe one most of the time — like they have the run of it. This is not uncommon among faculty children who have grown up within its walls and gates.

But I still worry. Part of me wants to walk them to their building every morning and pick them up from it after school. (I don’t, though, not anymore.) And sometimes when we go to a game, I even let them run off and play — excuse me, “hang out” — with their friends on the other side of the fields, and I plant myself in the bleachers as if it were the only place I wanted to be.

On such occasions I like to tell my friends I’m snapping off a helicopter blade.

At the last reading I gave, several poets were presenting their work, and one of them, Jeannie Gambill, read this one. It resonated, to say the least.

I sometimes think I will start to relax when my kids are past the age of twenty-five. Jeannie assures me this will not be the case.

Directive
to a grown daughter

When you ride your motorcycle
wear your helmet.
Not the half helmet.
Wear your full helmet
always.
When you go out on your motorcycle
take only streets
where
there are no cars
no trucks
no buses
no other moving vehicles.
Do not go out in the rain.
Never on the freeways.
When you decide instead
to go on your bicycle
be faithful to all of these
instructions. The routes
you’ve shown us you take to work
through neighborhoods
on your bicycle, there are
cars parked on these narrow
streets. Be careful. It’s hard
to see you.
Your motorcycle surely lost
from view when you are in traffic.
Do not go into the traffic.
Do not go anyplace where
there is danger. Stay
blocks away from any vehicle
in which the driver
is un-focused. Please say
you will do these things.
When you train on the highways
in the hills   when you want
the challenge   need the long
stretch   the cumulative miles
when you bike into the hills

when you take your bicycle
round the curve   slow
on the upward incline
and   down   down   gaining speed
the curve   go round the curve
go round and down the hill’s
curve     not too fast.
When you line it out
the song of you
adhere please
to this
entreaty.

Jeannie Gambill’s poetry has appeared in Gulf Coast, Cenizo, The Weight of 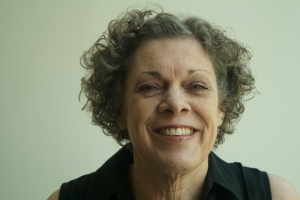 Addition: An Anthology of Texas Poetry, Untameable City: Poems on the Nature of Houston, and the Texas Poetry Calendars of 2011 and 2012. She was recipient of the 2011 Dana Award for Poetry, and a winner in the Artlines Competition (2012). She has been a featured poet in Houston’s Public Poetry Reading Series and was a finalist in the Ruth G. Hardman/Nimrod Poetry Competition. She lives in Bellaire, Texas.