The summer isn’t over yet, and if you’re scrambling around trying to find something else to read before August and/or the school year settle in upon you, allow me to make a couple of recommendations…

A few years ago I read Bewitching Season by Marissa Doyle and enjoyed it. 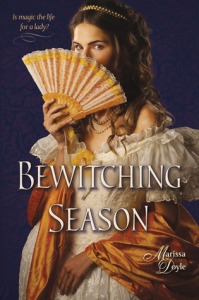 It was a sweet YA romance, set during the London season when Princess Victoria turns eighteen, but the queen-to-be is only a minor character. Doyle’s novel focuses on a pair of identical twins, Persephone and Penelope Leland, who share Victoria’s exact birthday and who are utterly thrilled to be coming out in society.

In part, Bewitching Season is about Persy’s charming romance with a dashing young man called Lochinvar. (Insert whatever cute associations you’d like to about his namesake being from a famous poem by Sir Walter Scott.) But beyond this storyline, Persy and her sister, Pen, must head off a dastardly plot to harm Princess Victoria, one which unfortunately also swirls around their beloved governess and teacher, Ally.

Oh, and throw magic into the mix, won’t you? Then make that magic taboo, so that all these lovely young women have to hide the fact that they’re becoming quite powerful witches, and worry about whether this will hurt their chances of making the right kind of splash in London society.

The sequel, Betraying Season, has amusingly occupied my free time this past week. 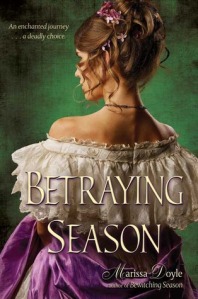 In this second book, Pen has found herself in Ireland, studying with Ally (who has recently married an Irishman). Although Ally has found herself too far gone with morning sickness from her pregnancy to be much of a hostess, Pen is studying magic with a formidable professor, Ally’s father-in-law, and discovering her own considerable powers in a landscape more suited to her natural abilities. Betraying Season also incorporates some excellent Celtic Goddess lore, for those of you who like that sort of thing.

And never fear, there is an engaging romance for Pen in this story, too, with one Niall Keating, whose family is not at all what they appear — or pretend — to be. I don’t want to give any spoilers, but those with feminist sensibilities will probably be quite satisfied with the way Pen’s various dilemmas get resolved.

If you are a reader of Serious Literary Fiction And Nothing Else, then perhaps you should select something else to read and give these books to your fantasy-loving adolescent daughter. If, however, your tastes also run to the fun, giggle-out-loud funny, and delightful, and if you appreciate a well-earned happy-but-not-saccharine ending, give Doyle’s books a try. I’m so glad I did.

And I’m confident that in a couple of years my fantasy-loving adolescent daughter will love them, too.

One thought on “Whom I’ve Been Reading: Marissa Doyle”