Although my favorite thing to read is a novel, I also love linked collections of short stories. The forgiving nature of a series of discrete narratives doesn’t make me feel guilty when my schoolwork prevents me from reading a novel straight through.

Sometimes these collections are linked by place; there are many of these. Others are linked by characters, such as Justin Cronin’s Mary and O’Neill. By an object: Susan Vreeland’s Girl in Hyacinth Blue. Some by concept: Her Infinite Variety by Pamela Rafael Berkman. Sometimes by theme: Drinking Coffee Elsewhere by Z.Z. Packer.

And sometimes a collection is linked by all of these. 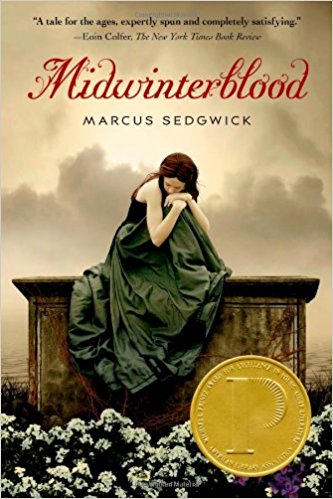 Printz Award-winning Midwinterblood by Marcus Sedgwick contains seven linked stories which travel backward in time on a remote and unusual island near the top of the world. They explore the themes of love and sacrifice in the myriad ways that love and sacrifice impress themselves on our lives, sometimes obvious and sometimes not. But the writing is never obvious, never predictable. Sedgwick’s work is often, I think, categorized as YA, but even if you don’t usually read in that category, give this one a try.

Eric and Merle are two characters who orbit each other in time, meeting each other in different ways. Sometimes in love, sometimes bound by a family relationship, sometimes tossed together by external forces, their interactions show the breadth of love and sacrifice. The writing is lush without overpowering the reader. The stories are based on an actual historical painting, Midvinterblot, but everything else in the novel comes from Sedgwick’s own imagination.

Honestly, I don’t know what else to say about this book that won’t give too much of the story away. Aside from the writing being enjoyable even down to the level of the sentence, I love the structure, how each story is illuminated by a subsequent one, how the orbit comes around in such a satisfying way, how the island itself is a character, how the names of the characters evolve, how the dragon flowers on the island and the image of the hare anchor the narrative. There is a hint of the fantastical in this book, but I wouldn’t call it fantasy; magic realism is more its purview.

This novel-in-stories accomplishes what the 1994 film Being Human tried to do but couldn’t. Midwinterblood captures two important facets of the immensity of human experience with crystalline clarity. And like a faceted prism, this story reveals a depth of possibility in every interaction, that we are part of something larger than ourselves. That love and sacrifice cannot be contained. It asks the question, is life truly this rich?

3 thoughts on “Whom I’ve Been Reading: Marcus Sedgwick”