It might be tempting for someone over the age of maybe thirty to read the dust jacket of Katharine McGee’s The Thousandth Floor and dismiss it as a story about entitled rich kids and their #firstworldproblemz.

Don’t do that. This book is really well written. 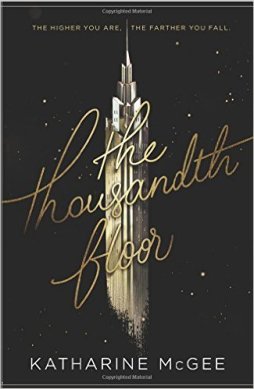 McGee has a facility with prose that makes this novel engaging, even gripping, and genuinely enjoyable to read.

She has imagined a Manhattan set about a hundred years in the future. This is a different kind of science-fiction novel, a YA social drama set in a future that feels so plausible: the ways in which technology have overrun the lives of her characters and deepened the divide between the haves and have-nots is both an extension of the cyborg-friendly path we’re already on and, frankly, also a little like magic. From a narrative standpoint, that makes a lot of the circumstances and interplay between the characters really convenient. From an artistic standpoint, it makes this crossover novel something that will appeal to readers of sci-fi, readers of fantasy, and readers of over-the-top high school drama equally well.

The setting of most of the novel is a thousand-story skyscraper in New York City, a miles-high building which has essentially replaced the city itself, and the extent to which this building plays a part in the social mobility of the characters, and provides a multitude of environments for the characters to make their good or bad choices, gives the skyscraper the feeling of being its own character. Moreover, it’s a character that can hold its own among a cast of luxuriously drawn humans, ones whose issues feel vital and relevant while being in some ways products of their own disappointing choices. And one thing I’ve learned as a fiction writer is that sometimes your characters have to be this flawed, this frustrating, for the conflict of the story to be nurtured.

McGee herself has said that she wanted to write a story set in the future that wasn’t a dystopia, and for some of her characters, a dystopia it is not. But deep underneath the entertaining excesses of The Thousandth Floor is a desperately hurting world in which nearly all the characters have the potential to move past their tragic difficulties and into personal bliss, if only they’ll let themselves do it. But this is the first book in a trilogy, so if you’re looking for a solution to every problem these characters face, you’ll have to wait for the second and third books to come out and hopefully resolve them. While The Thousandth Floor technically stands alone and has a satisfying, compelling climax at an extravagant teenage party on the top floor of the Manhattan building, the various characters’ conflicts ultimately evolve into one big, complex snarl to propel us excitedly into the second book…

…which is scheduled to come out in August 2017.

One thought on “Whom I’ve Been Reading: Katharine McGee”