This week’s review comes to us from Rebecca Burns. She has taken on Burial Rites by Hannah Kent, which is about the end of the life of Agnes Magnúsdóttir of Iceland.

Burns herself has a new book out, The Settling Earth. In her own words, it is “a collection of interlinked historical short stories set in colonial New Zealand. It fictionalises the experiences of settlers in the nineteenth century, and how British settlers made sense of life in a new land. A story written by a Maori guest author is also included, giving a Maori perspective to the act of colonialism.” Look for links to The Settling Earth in Burns’ bio blurb below. (Ah, I love the sound of alliteration in the morning!)

I have to be honest – I couldn’t wait to read Burial Rites by Hannah Kent. Published in 2013, the book centres on the last few months of the life of Agnes Magnúsdóttir, the last woman in Iceland to be executed. It is an imagining of those final weeks and days, when Agnes lived with a farming family until spring came and, with it, her death. The historical setting and subject matter appealed to me, though, as is sometimes the case when so looking forward to a book, I was wary of its being a disappointment. It was not. Burial Rites is terrific: evocative, powerful, tear-jerking, and sorrowful. 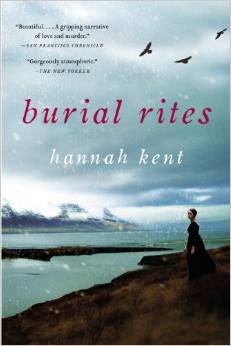 The strength in Kent’s writing lies in her ability to draw the reader towards her characters. Immediately, from the opening prologue, Agnes’s inner thoughts and feelings about her predicament are made clear:

They said I must die. They said that I stole the breath from men, and now they must steal mine. I imagine, then, that we are all candle flames, greasy-bright, fluttering in the darkness and the howl of the wind, and in the stillness of the room I hear footsteps, awful coming footsteps, coming to blow me out and send my life up away from me in a grey wreath of smoke.

Similarly, members of the Jónsson family, with whom Agnes spends the winter before her execution, are sympathetically portrayed. The awkward dichotomy of love-filled resentment between the sisters, Steina and Lauga, is captured in lines such as these where Lauga scolds her sister for leaving an important guest waiting: “ ‘I can’t think of what goes through your head sometimes, Steina,’ ”. The mother, Margrét, who initially resents the intrusion of Agnes, comes to love the unclean, unkempt convicted criminal in her home.

There is also the suggestion that Agnes is innocent, or certainly misunderstood. The naïve sympathy portrayed by Toti Jónsson, the local churchman tasked with tending to Agnes’s spiritual needs and readying her for death, is eventually felt by other characters in the story, and by the reader, too. This reaches a crescendo at the end of the novel, when Agnes is taken to her place of execution. Kent portrays the act in brutal, raw language. Agnes soils herself as she goes out to her death and has to be helped from her horse. She has to wait some distance away while her co-convicted is executed. Kent portrays sympathetically and convincingly the agony this wait causes, and the reader is already so wrapped up in Agnes and her woeful tale that they feel the agony for her.

Burial Rites is a beautiful book. The sort to return to again and again.

Rebecca Burns is an award-winning writer of short stories, over thirty of which have been published online or in print. She was nominated for a Pushcart Prize in 2011, winner of the Fowey Festival of Words and Music Short Story Competition in 2013 (and runner-up in 2014), and has been profiled as part of the University of Leicester’s “Grassroutes Project”—a project that showcases the fifty best transcultural writers in the county.

Link to The Settling Earth on Goodreads: https://www.goodreads.com/book/show/23725275-the-settling-earth